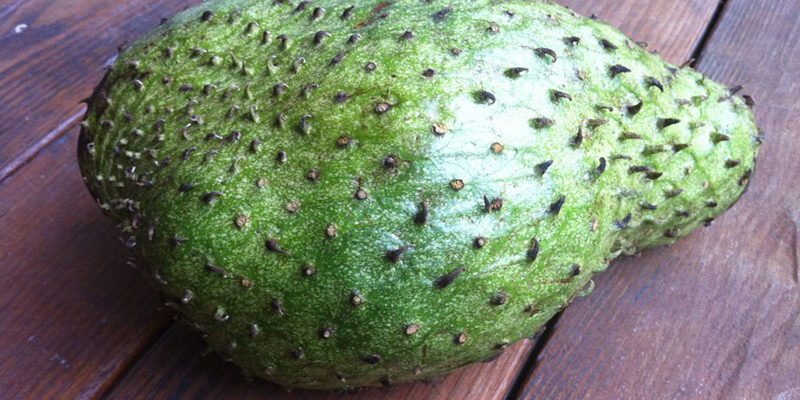 Graviola belongs to the family of Annonaceae and the one that interests us is the botanical species Annona muricata.

Common names of the most common Graviola: Graviola, soursop, guanabana.

Mode of Use of Graviola: the recommended dose is to acquire about 1.5-2 g per day.

Graviola is a small evergreen tree native to most of the tropical areas of South and North America, including the Amazon. Produces a large fruit and yellow-green that can weigh up to 5 kg, with a diameter of 15-23 cm containing inside a soft white pulp. The fruits grow on a small straight evergreen tree, 5-6 m high with large shiny leaves are dark green. Graviola in Brazil is appreciated for its pleasant aroma and unique flavor. Some studies have highlighted the possibility that the alkaloids present in graviola have strong antidepressant effects and, for this reason, are being researched. Due to its composition is tested for the alleged anti-cancerous properties. The fruit is sold in many markets of the tropics, is called guanábana in Spanish-speaking countries and graviola in Brazil.

All parts of the Graviola tree are used in herbal medicine, especially the leaves, bark and roots that are attributed to different properties.

Were found in Graviola Many bioactive compounds and phytochemicals that scientists are studying since 1940 and many uses in natural medicine have been validated by scientific research. Three separate research groups have isolated the compounds of acetogenin in graviola and have demonstrated anti-tumor properties and anticarcinogenic significant (selective toxicity against various types of cancer cells without harming normal cells). Have been published in eight clinical trials on their findings. Many of the acetogenins have demonstrated selective toxicity to tumor cells at very low doses. Four of these studies were published in 1998 and demonstrated the strong anticancer and antiviral capacity of the extracts of Graviola.

The Purdue University, West Lafayette in Indiana, has conducted important research sull’acetogenine (thanks to a grant from the National Cancer Institute and the American National Institute of Health – NIH) and its staff has analyzed at least nine patents (U.S. and international).

Graviola has been shown to have antibacterial and antifungal properties. Experiments conducted in the late ’70s by the National Cancer Institute (USA), showed active cytotoxicity against cancer cells present in the leaves and stem of graviola, so researchers have since continued his studies until he discovers the plant compounds called annonaceous acetogenins which seem to possess the ability to inhibit cell growth of certain types of cancer (colon, breast and lungs). A study at the Catholic University of South Korea seems to have shown that Graviola is 10,000 times greater than a chemotherapy drug such as adriamycin. Research on the effects of graviola cancer is progressing and four new studies were published in 1998 which seem to confirm the acquisitions of previous studies.

In all honesty it seems somewhat premature to rely on only in graviola cancer cure, but our hope is to further study medical science of this herbal very promising for the purpose of a possible rational use in cancer therapy.

1 thought on “Monograph on Graviola”