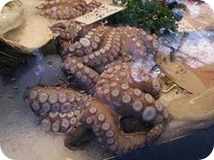 The octopus is a delicious food and the less unique, we can enjoy fresh only in some months of the year, January being made ​​one of the most interesting times in this regard.

It consists of a carnivorous marine mollusk, found especially in waters of both temperate and tropical climates, and is characterized by a soft body and eight arms, each of which in turn has two rows of suckers.

It is an ideal food to be enjoyed in the kitchen, thanks to her great versatility. In Spain, for example, is common octopus vinaigrette or popular Galician octopus (served with olive oil, paprika and some salt).

But do you know the different benefits of the octopus ? The truth is that it is as a health food, and outstanding from a nutritional standpoint.

From a nutritional standpoint, the octopus known for its high content of minerals, among which we find ourselves-especially-with zinc, an essential nutrient in maintaining defenses, besides participating in the development and growth of the sexual organs (helping turn if fertility problems in men).

With respect to vitamins, provides practically the same amount of niacin that the blue fish, as a nutrient essential for production of energy.

Unlike other seafood or shellfish, octopus known for its low cholesterol content. Of course, for his contribution in sodium consumption is not recommended if hypertension .

It is common to produce it with paprika, as it facilitates the digestion of meat, which by the way is difficult to digest for our stomach (also useful together with laurel boil).

Nutritionally speaking, the nutritional properties of the octopus are: