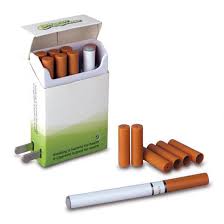 Electronic cigarettes have recently been amongst the most discussed innovations in science. They are electronic, battery driven devices which look exactly like the actual traditional cigarettes, but do not contain tobacco. Manufacturers claim that these e-cigarettes can help quitting smoking, while providing an outstanding imitation of the sensation and the act of smoking a cigarette.

When around 10 million people smoke cigarettes in the UK each year, Nicolites has launched an e-cigarette to further widen the benefits of substituting a tobacco based product with an electronic variant. A user can expect around a thousand puffs from each e-cigarette.

This disposable Nicolite variant uses the latest innovation which makes it a very affordable type of e-cigarette available in the market. This variant doesn’t need any charging and delivers a usage equivalent to approximately twenty-five actual tobacco cigarettes.

When fully consumed, it can be simply disposed off.

It’s an excellent option for those who wish to try an e-cigarette before spending money on a considerably costlier rechargeable variant.

Manufacturers claim that a disposable nicolite could be as much as 75% cheaper because once you have purchased a Nicolite starter kit, you just need to spend a dew bucks on affordable and replacable “cartomizers”. A cartomizer is an electronic component which is made up as a combination of a cartridge and an atomizer. This provides both a cartridge for storing the liquid nicotine and an atomizer to generate nicotine vapors by the appropriate mechanism. A single cartomizer capacity equals about 20 traditional tobacco cigarettes and perhaps costs very less.

E-cigarettes do not contain tobacco or any toxic chemicals such as arsenic and carbon monoxide, which a conventional cigarette is made up of. A recent survey conducted on a group of smokers, showed that the usage of e-cigarettes instead of traditional cigarettes could possibly lessen the health related symptoms of tobacco smoking.

Some of the possible health benefits are :

1. No chances of lung cancer or other pulmonary diseases like emphysema, due to absence of carcinogens and other toxic chemicals which are present in tobacco.

3. Clearing up the skin and giving you a healthier looking gums by improving blood circulation to them.

4. No change in color of fingers and nails, such as yellowing, due to a total absence of tobacco and smoke.

5. No discoloration of teeth.

6. No risk of leukoplakia which leads to white patches inside the mouth

7. No risk of hypertension and reduction in stress levels.

8. No risk of any cardiovascular diseases.

By using Nicolites disposable, you can ensure that you are far away from all the health risks which are associated with tobacco. The only component in e-cigarettes is liquid nicotine which is not carcinogenic in any way. After switching from traditional cigarettes to nicolites, you can ensure a better overall health.