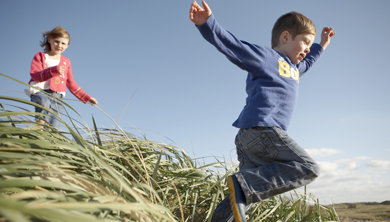 Over the last century the world has seen an increasingly active role of the virtual world in society’s daily experience. We’ve gone from experiential entertainment in mass media as radio shows and live performed plays to constant movie and t.v. show watching, televisions as big as the sky, and realistic video games with vast virtual worlds

Our economic activity revolves around computer based functions where people spend hours each week staring into a computer screen and completely forgetting about their surroundings, their senses, and nature.

Football and soccer games are played on fake grass, people run on treadmills while watching television, we drive in cars isolated from the outside world, and we are slowly destroying the beauty of the habitat that allows us to live.

Richard Louv, a journalist, talks about the effects of modern life separate from nature. He termed the phenomena Nature Deficit Disorder because of symptoms from nature deprivation that inhibit our creativity and positivity as we move through life.

Nature Deficit Disorder describes our lack of a relationship with our environment and the destructive effects it has on our children, family, community, and planet.

Robert Louv describes in his book, Last Child in the Woods, that we have created an environment for our kids that teaches them to stay away from nature. This creates problems for a brain that adapted to survive in the natural world which is the way society has lived up to the last century. Our brain isn’t ready for this new overstimulated world and therefore we have to begin connecting with nature again to be healthy, creative, and focused. Common symptoms of NDD include:

Louv found that the more people involve themselves with unstructured time in nature, the more these symptoms vanished or dissolved. He terms the idea of nature therapy as a means to protect our kids, as opposed to the pharmaceuticals (yet even more stimulants) that we normally give as ailments. In his book he observes that kids with ADHD, who are known to use medication as a sole means to gain better attention skills, improve their attention tremendously when they spend time in nature. He goes on to point out that nature won’t solve all our problems but it can be a great resource to overcome many modern reactions to a constantly plugged-in society.

Adults in the Workplace

Of course the implications of NDD do not just extend to the children of modern society, but also to the adults. We seem to spend so much time on computers at work, at home we watch television, talk on the phone, and check our social media sites. We don’t realize how constantly being plugged in inhibits our ability to be more creative and productive. Taking time away from being plugged in can help us prioritize what is most important to us: relationships, self-expression, friendships, compassion, etc.

Instead of spending a weekend watching a Mad Men marathon or going to the movie theatre, go out to a nearby state park. It might feel awkward at first, but remember, this is good for you. Connecting with the environment that has enabled you with the functions you need to survive and enjoy yourself (i.e. the environment that creates your food, the air you breath, the resources you use daily, and the laws that developed your physiology that allow you to be aware of yourself) is connecting with life itself and learning how to value what matters. Go outdoors and enjoy yourself!