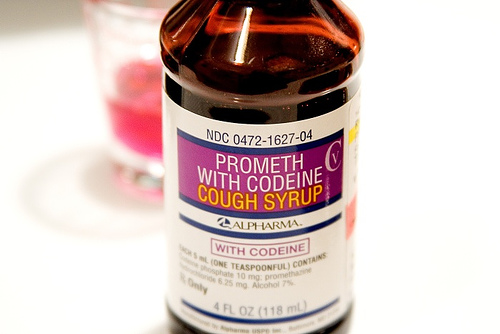 Codeine is technically legal, even though it’s as addictive as heroin

Codeine, an opiate just like heroin, is gaining increasing popularity, probably because rappers like Lil Wayne nonchalantly reference the drug’s use and make it seem okay for young people to try.

Dr. Damon Raskin, a double board certified internist and addiction specialist speaks to the rise in codeine use, mainly in the form of a liquid cough syrup concoction referred to as “Sizzzurp.”

It is unfortunate that rappers like Lil Wayne have become such influential role models in the lives of our nation’s young people. The true danger of codeine is not understood, and the nonchalant endorsements for its use in fun and pretty colored beverages, is alarming.

Like heroin and other opiates, codeine is highly addictive. Fatal codeine overdose is a reality, and addiction happens quickly with frequent use. Enabling plays a big part in the facilitation of an addiction. Lil Wayne’s mom, Jacida Carter, seems to feel her son’s addiction to codeine and marijuana is okay.

The way she sees it, the media is just picking on her son. She acknowledges his drug-related seizures, but attributes them to Lil Wayne’s hard work. In her words, “I think the media is making it a racial thing – like they are stereotyping my son. My Lil Wayne prefers weed and Sizzurp and that’s HIS choice, don’t judge a man for his medicine.” She compares Wayne’s codeine use to George Clooney’s cognac and cigar use to unwind.

Apparently Jacinda Carter too does not fully understand the dangers associated with codeine abuse and addiction.

As stated, codeine is like heroin. The highly addictive component to the drug stems from its ability to take away emotional, physical, and psychological pain almost completely, and its euphoric effect that makes the user feel good. The drug works on the pain/pleasure center of the brain, which makes withdrawal from the drug painful and uncomfortable, to say the least.

The start of getting someone help for a codeine addiction involves medically-monitored detoxification. An opiate addict cannot stop using his or her opiate of choice alone, or cold turkey. Medications are available to assist with the body’s reaction to ridding its system of codeine.

After detox, a codeine addict needs formal treatment. A residential inpatient program is a great step toward recovery. Find one that focuses on the mental health issues that lead to codeine use, abuse, and addiction, and that may lead the user back to the drug after an extended period of sobriety. Like many other chronic illnesses, addiction involves a high likelihood of relapse.

A codeine addiction treatment plan will take this into account. In working with the treatment team at the substance abuse rehab of your choosing, you will come up with strategies for addressing your unique set of circumstances and needs, so that you can work toward making clean and sober decisions everyday.

The availability of various combinations of individual psychotherapy, process therapy groups, addiction education, and holistic approaches to treatment are the sign of a good treatment center. The goal of the rehab program should be to help teach you how to strengthen your ability to build relationships and how to address existing relationship issues while in the comfort of a controlled treatment environment.

You, or someone you love, can stop using codeine. Seek help for codeine addiction now!